Much has been written about setting up boat galleys for cruising, but everyone has certain items they can’t live without.  I find that there are a handful of things I reach for again and again on Legacy, although they are choices that might not be obvious to others. 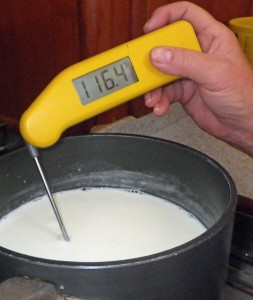 A digital instant-read thermometer has many uses in the galley.

Top of my list is a digital, instant-read thermometer.  We originally purchased it to check the doneness of grilled or roasted meats and fish, but it has proved useful for other tasks as well.  When baking bread, we use the thermometer to check the temperature of the water in which we dissolve yeast, as well as checking to see if the bread is done.  Properly baked crusty breads will have an internal temperature around 200 degrees.  I’ve also found our instant-read thermometer vital for making yogurt and cheeses. Because the thermometer is such a work-horse in our galley, we invested in a good one.  We love our Thermapen, which reads very quickly (an important consideration when your hand is hovering over a hot grill!) and is splash-proof.  While these professional thermometers cost about $95, less expensive digital thermometers are commonly available for around $20. 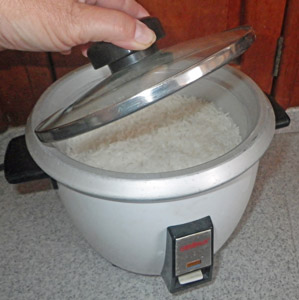 A rice cooker produces perfect rice without heating up the cabin.

Next on the galley hit parade is our small rice cooker.  Unlike full-size rice cookers, ours cooks a reasonable amount for a couple or small family — one to three cups of raw rice.  We run it off Legacy’s inverter, and it is an easy way to make a side dish without heating up the cabin.  It’s also possible to find small rice cookers with a steaming basket that sits above the cooking rice.  With that, one would be able to make a full meal of rice and either steamed veggies or fish without ever lighting the stove.  On the boat, I have a rice cooker made by Black and Decker.  My “off the boat” rice cooker is made by Rival.  Small rice cookers are available for less than $20. 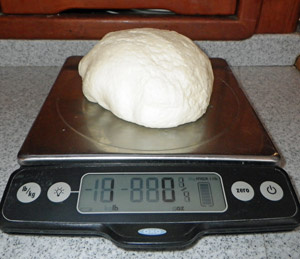 A digital scale is great for measuring ingredients, portioning servings and other kitchen weighing tasks.

Last season, we added a small digital scale to our galley.  It’s a piece of equipment I’d never considered until Chris started mixing bread dough using weight ratios.  A digital scale is small and flat, so doesn’t take up much room.  In addition to baking, we use the scale for mixing powdered milk, apportioning meat before freezing, and to evenly divide portions of bread or pizza dough. One challenge with the digital scale is using it when anchored in a swell. It acts a very sensitive accelerometer and the weight rises and falls as waves pass under the boat. Usually this effect can be ignored, but in large swells it might be necessary to average the highs and lows.

Using the stick blender to puree soup right in the pot.

The last item is an immersion blender, also known as a “stick blender”.  Ours was very inexpensive (about $20), but does a great job.  It comes with a tall cup that can be used for whipping cream or other small quantity items.  It’s great for making pureed soups because it’s less messy.  I blend soups and sauces right in the pan, rather than having to transfer hot liquid into a traditional blender.  It’s also an easy way to make breakfast smoothies.  Put the ingredients right in the tall cup, blend, and pour into glasses.  However, if you are using frozen fruit, don’t put it in the cup first.  Add other ingredients, then the frozen fruit, so that it doesn’t make a frozen clump in the bottom of the cup! The immersion blender has almost completely replaced my traditional blender on board.  The latter is now relegated to deep storage and brought out only to make margaritas and other “umbrella drinks”. So, those are my top choices for less common galley items.  What are yours? Fair winds and following seas, Heather, The Cruising Cook

This entry was posted in Cruising, Provisioning. Bookmark the permalink.