In Search of the Perfect Tortilla

Walking away from the tortilleria, I took a bite of the warm, thin, delicate tortilla.  Could this be the one?  The perfect tortilla that I’ve been seeking?  It could be – it has just enough substance to hold together, no floury taste, just the right amount of lard for an unctuous mouth feel, and still warm from the comal of the older Mexican woman who had made it by hand.  Back on our sailboat, Legacy, I gave it another test, just to make sure.  I spread the tortilla with butter and grated over it the hard Mexican brown sugar known as piloncillo.  It was such a mouth-watering combination, I would have been happy to eat the whole stack and call it dinner.

Our quest for the perfect tortilla began when we arrived in Mexico after cruising down the Pacific Coast from Alaska.  After a season of cruising aboard Legacy, we had narrowed our requirements.  We decided that we preferred flour tortillas to corn, and that we liked thinner, more delicate tortillas to the thicker, bread-like tortillas found in the Southwestern U.S. and parts of Mexico.  After exhaustive research – in other words eating lots of tortillas – we had focused in on the delectable tortillas found on the Baja California peninsula. In the larger cities of the Baja such as La Paz and Cabo San Lucas, we found that the tortillerias were larger or located within a big supermarket.  The tortillas were good enough, but lacking in the charm and character we were seeking.  We decided to look further, and explored the smaller towns and villages of the area.

In the smaller communities, there are generally one or more women who make tortillas by hand.  These women have an important role in the life of the community, and just about anyone we encountered could direct us to the local tortilleria.  We found credible contenders for the title of perfect tortillas in San Evaristo, Bahia Concepcion, and Loreto. 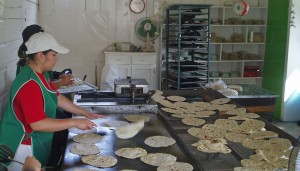 In the quaint mining town of Santa Rosalia, we found a fascinating small tortilla factory where we were able to watch our tortillas being made.  The entire process took place in one large room.  At the first station, a young woman sat with a large pan of dough balls and an electric tortilla press.  As the dough came out of the press, she flipped the pressed dough onto a huge griddle tended by a young man.  Once the tortillas were cooked on both sides, he flipped them onto a large metal cooling grate.  The two women working at the counter snatched the fresh tortillas off the cooling grate, bagged them in one-kilo parcels, and sold them about as fast as they could be produced.  The result was an excellent tortilla and we awarded it extra points for pure entertainment value. 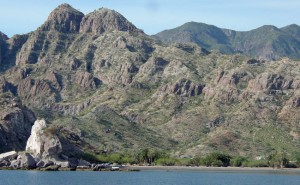 The small village of Agua Verde on the inside of Mexico’s Baja Peninsula. Home of the perfect tortilla!

The Santa Rosalia tortilla was the leading contender until we arrived at the remote village of Agua Verde.  A laughing group of kids greeted us as we arrived on the beach and led us to the local tienda to buy groceries.  We asked the shopkeeper for tortillas and she dispatched one of her children to the local tortilla maker.  By the time we finished our shopping, the young boy was back with our made-to-order tortillas, still too warm to touch comfortably.  We had barely paid for our purchases and left the tienda before we ripped into the package and started snacking on the warm tortillas.  By the next day, we had consumed the entire kilo and headed back for more.  Yes, we have a winner!  Our perfect tortilla was found in a tiny village with no electricity or running water, but lots of friendly people and lovingly prepared food.  Since then, Agua Verde has been one of our favorite stops when cruising in Mexico.

Sadly, as much as we love our current cruising locale – Tenacatita and the Gold Coast of Pacific Mexico mainland – in this part of the country, corn tortillas are the norm.  Most of the flour tortillas we find are factory-made, shelf-stable, cardboard-like tortillas.  Therefore, we set out to see if we could reproduce our favorite Baja-style tortillas.  Ours don’t rival hand-made Baja tortillas, but they are definitely better than what we can buy on the Gold Coast.

Put the flour, salt, and baking powder (if using) into a mixing bowl and mix them together until blended.   Add the 5 tablespoons lard to the bowl and mix the lard into the flour mixture with your hands until the lard is evenly distributed.  The texture should be something like cornmeal.  Add the water to make a soft, easily kneaded dough.  Turn the dough out and knead it for about three minutes (don’t over knead).  The dough should have a nice velvety texture.

Divide the dough into 12 equal pieces.  Roll each piece into a ball and coat with a little melted lard.  Place all the balls in a bowl and cover with a moist towel.  Let the dough rest at least 15 minutes, and as long as two hours.

Flatten the dough balls with the heel of your hand on a lightly floured surface and roll into thin tortillas about 5 to 6 inches in diameter.  (If the dough feels rubbery and resists rolling try letting it rest a while longer, also add a little more water to the dough next time.)  I find that rolling once in one direction and then flipping and turning the tortilla and rolling once in the other direction several times gives a nice round shape.  Don’t stack the uncooked tortillas; leave them laying on the floured surface until you put them in the pan.

Cook the tortillas one at a time in a heavy pan preheated over medium heat.  As soon as small bubbles form, flip the tortilla and cook the other side until very lightly browned.  The tortillas should cook quickly.  Tortillas will keep for several days in the refrigerator.

This entry was posted in Cruising, Recipes. Bookmark the permalink.

2 Responses to In Search of the Perfect Tortilla