Sodastream Review: You Had Me At Seltzer!

For years, I’ve seen the Sodastream and other carbonated drink makers and wondered if one would be a good addition to the boat.  Storage of bottled or canned drinks is always a problem aboard, and if you don’t have a car and ready access to a mega-mart, loading up on soda can be a real chore.  We’ve also encountered a lot of off-tasting flat soda in Mexico due to age, heat, and improper storage. It’s really disappointing to break out a cola and find it flat and lifeless. We like to drink fruit juices mixed with seltzer on Legacy in addition to a modest amount of soda and tonic water.  I hate buying and carrying all that carbonated water back to the boat, so I decided to purchase a Sodastream and put it through its paces.  To my delight, I discovered that it worked even better than I had hoped! 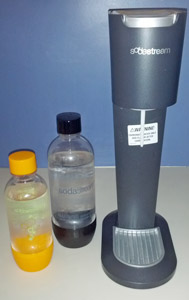 The Sodastream Genesis with 1 liter and 1/2 liter bottles.

I bought a Sodastream Genesis, which is modestly sized, simple to use, and needs no electricity or batteries.  It has a small footprint on the counter (6″ wide and 9″deep), and stands 16 1/2″ tall.   I plan to put it in a nook that currently holds my seldom-used airpot thermos.  My first test was to make plain seltzer.  I filled the provided bottle with tap water and put it in the fridge to chill.  Once it was cold (which helps the carbonation process), I uncapped the bottle and screwed it onto the Sodastream “tap”.  The directions say to briefly press the button on the top of the machine several times until you hear a loud buzz, then continue pressing for a total of 3 – 10 loud buzzes, depending on your desired level of carbonation.

On my first attempt, I under-carbonated the seltzer because I mistook the hiss of adding carbonation for the “loud buzz” noted in the directions.  On my second try, once I reached the “loud buzz” stage it was unmistakable.  I’d call the loud buzz more of a loud “blat”.  For our tastes, five “blats” is about right.  The initial carbonation level is a little high, but the seltzer or soda retains its fizz better in the fridge than when the initial carbonation is lower.  The process was incredibly easy, and it takes well less than a minute to carbonate a liter bottle.  Once the water is carbonated, you can use it as seltzer or add flavorings to make soda, tonic, lemonade, or tea.  In addition to commercially available flavors, small amounts of fruit juice or essences can be added to make flavored water.

When drinking carbonated beverages other than seltzer, we generally stick with diet versions.  In our normal cruising grounds of Mexico, our options are limited to diet cola and diet lemon-lime (7-Up or Sprite), and occasionally Diet Dr. Pepper.  I’m not a fan of cola (unless mixed with rum!), so I hoard whatever other flavors I can find.  We also like tonic water, but it is very rare to find diet tonic in Mexico. 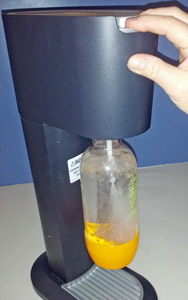 Pressing the button sends a shot of carbon dioxide into the bottle.

We tried a wide variety of the soda mixes, including the six diet flavors that were included in the starter pack with our machine.  Along with my taste testers, I tried Diet Cola and Cola Zero mixes.  The Diet Cola didn’t impress us, but it was okay when mixed with rum.  The Cola Zero was very close to Coke Zero, and it made a good all-around cola.  If you’re someone who is extremely loyal to one brand of cola, you might want to try the cola syrups before purchasing a Sodastream.  I’ve heard that it is possible to buy real Coke or Pepsi syrup made for fountain use, but I didn’t investigate this option.

The Diet Tonic syrup made a perfectly acceptable tonic water.  We’re looking forward to having gin and tonics aboard Legacy without added sugar!  I also liked the Diet Dr. Pete, which wasn’t exactly like Dr. Pepper, but it was pretty close and quite tasty.  The Diet Cream Soda, Diet Root Beer, and Diet Ginger Ale were hits, while the Diet Lemon-Lime was the hands down favorite.  We also tried a couple of oddball flavors that were part of the sample pack:  Diet Cran-Raspberry that tasted vaguely cranberry-like, but was refreshing, and a Diet Red Grapefruit that was just okay and smelled more like grapefruit than it tasted. 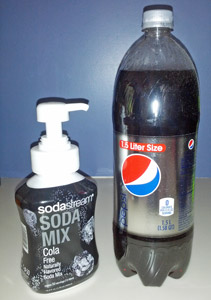 The pump makes for neat dispensing, but may be less useful on the boat.

Given how cheap Coke and Pepsi are in most parts of the world, I don’t think that our Sodastream drinks will be cheaper than purchased soda, but the convenience, lack of trash, and variety of flavors available make it a worthwhile investment for us.  I found the Sodastream Genesis on sale for $89, and the flavorings cost from $4.99 to $6.99 per 16.9 ounce bottle (which makes 12 liters).  In addition, I purchased additional carbonating bottles, including a couple of 0.5-liter bottles, and a pump that can be used to dispense syrups. I like the convenience of the pump, but don’t think it will be practical aboard Legacy, where I will keep the syrups stashed away in lockers.  I’m still eyeing a $7.99 “cozi” that fits a liter bottle, which might be useful for taking cold beverages to potlucks or other boats.

The biggest issue I see for cruisers is replacement of the carbonating cylinder.  In the U.S., Bed Bath and Beyond and other retailers offer cylinder exchange for about $10 as well as selling spare cylinders for about $20.  Before returning to Legacy (by car) in the fall, we plan to exchange our used cylinder and buy a spare.  Since each cylinder makes about 60 liters of soda, we expect that we’ll have sufficient supplies for the season.  For cruisers who spend extended time outside the U.S. or fly back to the boat, the cylinder issue may be a deal-breaker.  You probably cannot carry the pressurized cylinders in your airline luggage.

The Bottom Line:  If you cruise in areas where replacement cylinders are available or regularly travel by car from the U.S. or Canada to your boat, a Sodastream may be a worthwhile addition to your galley equipment.  If you are out of the country for extended periods of time, or only fly back and forth to your boat, continuing to buy soda and seltzer may be a better option.

This entry was posted in Cruising, Reviews. Bookmark the permalink.

One Response to Sodastream Review: You Had Me At Seltzer!