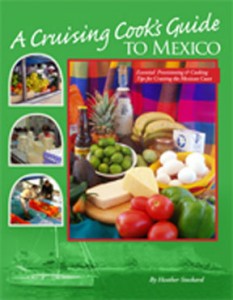 As with Mazatlan, we found a number of changes when we returned to the Gold Coast of Mexico in 2012/13.  Some of the changes are for the good and, unfortunately, some not so good.  The following are updates to A Cruising Cook’s Guide to Mexico, first edition.

Barra de Navidad:  Sadly, Maria is no longer operating her tienda or custom provisioning service in Colimilla, as she wanted to spend more time with her family and on other ventures.  However, she and her husband continue to provide water, propane, and laundry service, touring the lagoon in their panga.  In early 2013, her radio was not working, but you can reach her at  314-337-9086 . You can also drop propane tanks or laundry at Fortino’s restaurant for her.

Her uncle still has his excellent fish market.  As you travel down the Colimilla beach between Fortino’s restaurant and Mary’s restaurant, you will see the panga landing.  Just behind the beach, you’ll see a long wall with “Fish Market” and an arrow on it.  Land your dinghy on the beach and follow the sign up the street to a white building.  On a recent visit, we bought a kilo of dorado and a kilo of large shrimp at reasonable prices.  All the fish is frozen, which we prefer for stocking up.  If you want fresh fish, try the fish markets between the water taxis and dinghy dock in Barra.

We sorely missed Maria when re-provisioning in Barra.  The tiendas were less well stocked than I remembered.  Costa Alegre, across from the ATM, seemed to be the best supplied with a few gourmet and Asian ingredients.  Fruiteria Ixtapa continues to be a good source of produce, particularly after re-supply on Tuesdays and Fridays.

The French Baker now has his own panga complete with cheerful bell.

The French Baker is still making his rounds each day in the marina and the lagoon with his delectable pastries.  With one day’s notice, he will also bake nice loaves of whole wheat, multigrain, or rye bread.  He now has his own panga, complete with the French Baker sign, and a little bell that he rings as he approaches your boat.  Just the tinkle of the bell is enough to make me start drooling like Pavlov’s dogs!

Melaque:  This slightly larger town has more and larger tiendas than Barra, and is another option for re-provisioning.  Super Hawaii continues to attract gringos with its selection of hard-to-find items, including baked beans, snack crackers (Goldfish and Cheeze-its!), U.S. multigrain breads, and imported canned goods.  Some of the prices are really high, however, so make sure to check the tags.  Melaque also has well-supplied hardware stores.  The bus is currently 6 pesos from Barra to Melaque and a cab back was 50 pesos.

Playa Tenacatita:  This formerly popular small town at the head of the “Jungle River” is no longer accessible to cruisers.  A land deal gone bad resulted in the bulldozing of the restaurants and tiendas.  The town is now fenced off and patrolled by guards and/or municipal police. 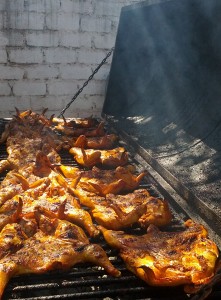 “Flat chickens” on the grill at Pollo Asada in La Manzanilla.

La Manzanilla:  Juan is now providing water taxi service in his panga between the Tenacatita anchorage and La Manzanilla.  This is an excellent option for those cruisers that don’t want to take their big boat across the bay or just want to avoid the wet dinghy landing and takeoff in La Manzanilla.  Note that the trip back across the bay can be wet, even in a panga.  Juan doesn’t speak English, but if you have a bit of Spanish, you can contact him at 315-104-6608.  He can squeeze 10 – 12 people in, but it’s more comfortable for 6 – 8 people.  For 6 or more, in 2013 he charged 150 pesos per person round trip.  It’s a little higher for less than 6 people.  Another option is to take a taxi from the Blue Bay Hotel.  If you have sufficient Spanish to call, you may even be able to get one to pick you up at the palapa restaurant in Tenacatita (La Vena).  In 2013, a small cab holding 3 – 4 people was 200 pesos each way or 400 pesos round trip.

This year, we found the tiendas in La Manzanilla to be better supplied than those in Barra.  We found a good selection of produce, including mushrooms, eggplant, and red bell peppers.  I even found  half and half (crema ligera)and heavy cream (crema para batir) in a couple of tiendas.  (We dilute heavy cream with milk to make ½ and ½ for our coffee).

Mariscos Deli – aka “The Canadian Deli”

A tremendous find is Mariscos Deli, known to cruisers as the “Canadian deli”, which has been open for a couple of years.  The deli offers excellent cheeses and deli meats, as well as meat pies, English muffins,  ground lamb, hot Italian sausages, house-made pickles, good bread, Costco-sized bags of good potato chips, and other hard-to-find items.  You can call them at 315-351-7041 or email mariscosdeli@hotmail.com .  On a recent trip, we made our purchases early in the day and they held them in their fridges and freezers until we were ready to head back to the boat.

Pedro’s Tacos – Pedro will tell you they are the best in the galaxy; he might be right!

Other places of interest to cruisers include Pedro’s Tacos – a truck near the cocodrillos reserve – with excellent inexpensive Baja-style tacos.  Another favorite stop is Pollo Asada, the “flat chicken” place near the panga landing.  Services are also available in town: Chris managed to get a filling replaced at the local dentist who provided excellent, hygienic service.  Note that there are no ATMs in La Manzanilla, but it is possible to take an inexpensive bus to Melaque if you need to resupply cash.

For human medical emergencies, note that both the Blue Bay Hotel in Tenacatita and the Wyndham Isla Navidad hotel (aka Grand Bay) in Barra de Navidad both have doctors on staff who are willing to treat cruisers.  Contact the front desk in person or by calling 315-351-5020 (Blue Bay in Tenacatita) or 314-331-0500 (Isla Navidad in Barra).

This entry was posted in Mexico - First Edition, Updates to Publications. Bookmark the permalink.