“Season to Taste” — What exactly does that mean?

In many recipes you’ll see the words, “season to taste”.  Most cooks just throw in a little salt and pepper and hope for the best, but there are some useful techniques to produce better tasting food.  With the recipe below, we’ll replicate an exercise we learned taking recreational classes at our local culinary school.  It’s easy, fun, and maybe you’ll learn something as well!  We’re using leek and potato soup because it’s easy to work with, but you could also try the exercise on anything you happen to be cooking, preferably a soup, stew, or one-dish meal.

*”Season to taste”:  okay, now the fun begins!  Arm yourself with two small bowls, a stirring spoon, and a tasting spoon.  Collect your arsenal of seasoning tools:  salt, pepper, something acidic for brightness (lemon juice, lime juice, or some type of vinegar — depending on what you are making), and something to add a little zing (cayenne pepper, sriracha, bottled hot sauce, crushed red pepper flakes). 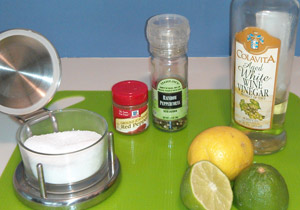 Salt, pepper, and and acid (vinegar, lemon, or lime) are standard tools for adjusting seasoning.

Add a couple of large pinches of salt.  Stir the salt in well and give it another taste.  As you add salt, it shouldn’t taste “salty”, but you should start to pick up more and more flavor of the ingredients — in this case the leeks and potatoes.  Keep adding salt until the soup is very flavorful.  How do you know if one more addition of salt is going to be too much?  This is where your second small bowl comes into play.  Put a small amount of soup in the bowl and add more salt.  Taste.  If the salt improves the flavor, add more to the full pot.  If not, it’s time to stop. What if you’ve added too much salt?  Don’t worry — adding a little of your acid will back off the saltiness of the dish!

Once you’ve brought up the flavors of the ingredients using salt, it’s time to balance the flavor using your other tools.  We almost always find that a little acid improves a dish, and for our tastes, a little heat is good as well.  Use the techniques of tasting and testing in a small bowl to make the soup taste good to you.  Everyone’s taste is different!

Once you have tasted the completed soup, go back and take a taste of the soup we initially set aside in a small bowl.  It will probably taste incredibly bland to you.  See — you’ve just learned how to make everything taste better in one easy lesson!

Because we are going to serve the leek and potato soup chilled on this hot summer day, we will taste and adjust the seasoning again just before serving.  You may find that foods served cold will require additional seasoning.

But wait, you might say — isn’t all that salt bad for you?  The major source of sodium in the North American diet is processed food, and especially fast food.  We like to use salt to make our home-cooked food taste better.  The trade-off we make is to avoid processed foods so that we feel we can use salt liberally in the galley.  If we end up using 1 – 1 1/2 teaspoons of salt in the recipe above, I estimate that the total sodium content of the soup will be 450 – 600 mg of sodium per serving.  For comparison purposes, most canned or boxed soups have around 750- 800  mg per serving, as does a small chili at Wendy’s. A Quarter-Pounder with Cheese at McDonald’s has 1100 mg of sodium.  So, season to taste without guilt, and enjoy your soup!

This entry was posted in Main Dishes, Recipes, Side Dishes, Techniques. Bookmark the permalink.